We had a quick look at Severus’ and Caracalla’s Profectio coins earlier, but there are a couple of interesting anomalies with them that make them worth a closer look, which is what we’ll do on this page. There are no new coins about Britain here, so feel free to jump ahead to the next emperor, Victorinus.

Septimius Severus and Caracalla are said to have travelled to Britain together in 208 AD to begin a campaign against the tribes of northern Britain in what is now modern day Scotland. If this date is correct, then their Galley coins from 207 AD, and Caracalla’s Two River God coins, are difficult to attribute to the trip to Britain as they are a year too early.

208 AD is well accepted as the date they travelled to Britain, but the only hard evidence for this comes from the Profectio coins from 208 AD with the legend “PROF AVGG”. PROF is short for Profectio which was the ceremonial departure of the emperor, and AVGG stands for two emperors (AVG means Augustus, and AVGG means two Augusti). There is some soft evidence that supports them both travelling in 208 AD, but it can be discounted or interpreted to give different dates.

As this date depends entirely on the Profectio coins, it’s important that we interpret them correctly and are sure that this is the date they actually tell us. As we’ll see, it turns out that they might tell us something different.

The Coins and Their Problems

The standard interpretation of Profectio (leaving Rome for war) and the date 208 AD is muddied by the fact that these were not the only Profectio coins minted by these emperors at this time. There are in fact three groups of Profectio coins to consider:

If taken at face value and with the standard interpretation of Profectio, the coins tell us that the emperors left Rome together (group 1) and separately (group 3) in 208 AD, and then again in 209 AD (group 2), despite already having left in 208 AD.

This obviously can’t be correct, so we need to find an explanation.

The first issue to solve is where the emperors left from in 208 AD and 209 AD, and the three scenarios that can explain the coins with AVGG are:

The second issue to solve is did Caracalla go on a solo expedition in 208 AD.

Both Emperors left Rome in 208 AD

This is the standard narrative, and it has all of the coins relating to the emperors leaving Rome in 208 AD. This means we have to explain Caracalla’s coins from 209 AD with AVGG on them. It’s possible that he minted them to remind people that they had gone to war, but if so, why don’t we have any Profectio coins from 210 AD? Surely he would want to remind people then as well?

We can rule out the two Profectio coins (RIC 4 225 Photo and RIC 4 226 Photo) from Caracalla which are dated to 210-213 AD by their legends, as his portrait dates them to 213 AD (Caracalla’s portraits changed as he grew from a young boy into a man. The portrait on these coins matches ones used in 213 AD). That means these coins were minted when Caracalla left Rome for his campaign in Germanica.

A possible explanation to the missing 210 AD coins is that the campaign in 210 AD was not expected so Caracalla didn’t want to publicise what amounts to a failure of the first campaign.

This still leaves the issue of no Profectio coins for 210 AD, but the previous argument can still be used. Caracalla didn’t want to advertise a failed campaign.

A third way to interpret these coins is to assume that there were no Profectio coins for leaving Rome, and that the 208 AD coins with AVGG show the two emperors leaving York for their first campaign in Scotland, and the 209 AD coins show the two emperors leaving for their second campaign in Scotland, or more likely, their second year of the first campaign. Again, it requires us to interpret Profectio differently from just “leaving Rome”.

This scenario puts the start of the campaign in Scotland a year earlier than normally thought. It doesn’t mean they arrived in Britain in 207 AD. It might just mean that they arrived in 208 AD as before, but spent less time preparing than traditionally thought.

It’s also possible to argue that Profectio coins were not appropriate for the emperors leaving Rome for York. After all, Profectio is thought to mean the emperors were leaving for war, but in fact they were just leaving Rome for a provincial city. They left York for war. It’s a subtle distinction, but it might have been important in 208 AD. 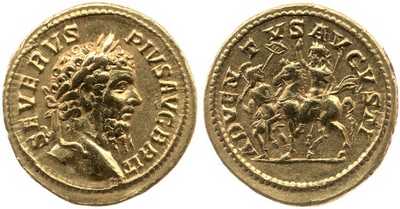 Severus Arrives. But where?

The Adventus coins (the emperor arrives at a city) of 210-211 might lend support to this theory, because they were also minted by Severus and he never returned to Rome. Now it’s possible they were minted for a return to Rome that got cancelled because of the uprising in 210 AD, and Severus’ Galley coin of 210 AD which suggests travel might support this (but it might just be celebrating the navy shipping him to York from the front line), but if they do refer to York, then they must refer to a return from war rather than an imperial visit, in which case the Profectio would arguably have been for leaving York.

Severus travels, but from Scotland to York, or York to Rome?

Did Caracalla Embark on a Solo Campaign?

The third group of coins were minted by Caracalla and just say Profectio. The lack of AVGG in the legend is interesting. There was space on the coins for AVGG , and the mint in Rome had excellent quality control so are unlikely to have forgotten to add it.

Could it have been deliberate rather than an error?

We can note that the 208/209 AD Profectio coins are almost the only ones to ever shorten “profectio” to “prof”. Severus Alexander in 231 AD is the only other emperor to shorten it this much. Septimius Severus used “Profect” on 4 coins around 200 AD, but all other emperors, including Septimius Severus (197-201 AD) and Caracalla (213 AD) used the full “profectio”. This suggests that the mint in Rome around 208/209 AD were being efficient and were only including the minimum of information on the coins. As the reverse of the coin showed Caracalla on horseback, the AVG would have been obvious and could have been validly omitted. It’s not known why they would do this, but perhaps it was to save time in die preparation.

So it’s possible that the missing AVGG wasn’t a mistake, and that the 208 AD coins were referring to Caracalla alone. In which case, they would refer to a solo campaign by Caracalla to the north of Hadrian’s wall to secure the north of England and the Scottish lowlands in preparation for the main campaigns. It’s not clear where else a solo campaign could have taken place that year.

There is an alternative explanation though. The Profectio coins can be split into three groups as described in the introduction to this section, although this time I’m including the metals used.

Note that RIC 4 439 is the only bronze coin in Group 3, and it is marked in RIC with “C.517 (rev. legend ?)”, suggesting Cohen just made a mistake cataloguing it. It has not been possible to find an example to determine what the legend is. If we assume a mistake, and move it to Group 2 with the other bronzes, then the groups look like this:

Which are perhaps more clearly written as:

If we look at the table above in this context, we can see that Severus was telling all parts of the population in 208 AD that both emperors had gone to war, thus promoting his son with both the military and the mob. This would have been important as Severus had broken the tradition of adopting a worthy successor rather than just promoting his son (this tradition was broken when Marcus Aurelius adopted Commodus, and Severus confirmed that it wasn’t a one-off decision).

Caracalla’s bronze coins told the lower classes in both 208 and 209 AD that both emperors were going to war, thus linking his actions to that of the senior emperor and securing his position with the mob. However, he was sending a message to the army that he alone was the one leading them. Herodian (3.15.1) says of Caracalla during the British campaigns:

“Caracalla, however, paid little attention to the war, but rather attempted to gain control of the army. Trying to persuade the soldiers to look to him alone for orders, he courted sole rule in every possible way”

It’s not clear what conclusions to draw from this. The 208 AD silver coins from Caracalla (no AVGG) might still represent a solo campaign led by him, in which case the coins would be distributed to the military, and would be entirely appropriate. They might, however, just be propaganda and represent no specific campaign.

His coins of 209 AD might represent Caracalla and Severus leaving York in 209 AD (for the first or second time – see the earlier section for a discussion on that), or they might just be a reminder for the plebs that the emperors (but mainly he) had left Rome for a war.

The anomalies in the Profectio coins pose the following questions:

For the first question, the coins could suggest Rome, York, or Rome and York. If the 208 AD coins are for leaving York, then we can’t say that the emperors left Rome for Britain in 208 AD, and therefore we can’t rule out (based on the coins alone) that they didn’t travel in 207 AD.

For the second question, Caracalla’s 208 AD (no AVGG) coins could represent a solo campaign that year, but could also just represent Caracalla trying to take control of the army.

There doesn’t appear to be enough evidence to answer either of these questions definitively. And that’s important, because the soft evidence discussed in the introduction allows a start date of 207 AD or 208 AD, and it is these coins that are used to select 208 AD and give the firm date to the start of the campaigns.

Caracalla hangs out with some river gods in 207 AD, but are they British river gods?