There are four (maybe six) coins, all showing river gods, that might be associated with Septimius Severus’ campaigns in Scotland, although I have to be clear now that the links are tenuous and disputed. I’ll discuss why later.

The first two coins (RIC 4 96 and RIC 4 175) are denarii from Caracalla showing him in military attire, standing over three figures. RIC 4 describes these as a river god and two captives, but it’s wrong. It’s clear from the best quality coins that the outer two figures are river gods and that the third figure isn’t a captive at all. This has led some to suggest that the river gods represent rivers in Britain (the Tyne and Eden near Hadrian’s wall, the Solway Firth in the territory of the Selgovae, or the Forth and the Tay which were the two major rivers that were thought to be bridged during the campaigns), and that the figure represents Britannia, who is under the protection of the emperor. I’ll discuss Britannia on these coins in the next section.

Nicholas Reed (“The Scottish Campaigns of Septimius Severus“, 1977) proposed a timeline that had Caracalla campaigning in Britain in 207 AD, and suggested that these coins refer to his campaigns against the Selgovae who lived to the immediate north west of Hadrian’s wall and who would have to be subdued before the Romans could safely travel north by the east coast route. Reed thought that the river gods might then refer to the Solway Firth. Many people dispute this because the standard narrative for the campaigns has Caracalla travelling to Britain with Septimius Severus and Geta in 208 AD. However, it turns out that there’s very little evidence to say where Caracalla was in 207 AD. The main alternative to him campaigning in Britain is that he was campaigning in Parthia.

Proponents of this theory point to the fact that the coin is a copy of Trajan’s victory in Parthia coin (RIC 2 642 – photo), and say that it must therefore relate to an undocumented campaign in Parthia in 207 AD. However, the Severans liked to copy coin designs, and as they used Judea Capta imagery for Scotland (a palm tree. For Scotland. Really?) then the fact that Trajan’s coin was for Parthia becomes irrelevant. Another coin design relating to Parthia, Hadrian’s “PACATOR ORBIS” design, was also reused, but can be discounted for the same reason. There was an increase of Caracalla military coins in 205/206 AD in that area, but the peak in production in 206 AD, along with him gaining his second imperatorial salutation (IMP II) by the 30th of March 207, suggests that any campaign was in 205/206 AD and was all over by early 207 AD. This slim evidence doesn’t confirm a Parthian campaign, but even if there was one, it seems he could have still had time to travel to Britain in 207 AD.

There’s even less evidence to say he was in Britain. One argument for him being in Britain is that he was quite an ambitious chap, and it seems very unlikely that he would have found himself at the furthest point in the empire from where all the action was about to happen. Horace wrote in 23 BC

“Augustus will be recognized as a god on earth for his subjugation of the Britons and Parthians” (Odes III. v)

so there was a lot of glory to be had for Caracalla if he could also conquer the British (he had already claimed credit for conquering the Parthians, despite being only nine at the time).

A second argument for being in Britain in 207 AD comes from the next two coins.

These aurei from Caracalla and Geta date to 211 AD. These show the emperor in military attire, standing over a river god, although RIC 4 describes it as a captive, and possibly Britannia, on Geta’s coin (RIC 4 82).

Caracalla’s aureus coin isn’t in RIC 4 but was sold by CNG who describe these coins as the last of the British Victory coins, suggesting that the river is the Tyne at Hadrian’s wall, or even the English Channel. Because these coins were minted after the campaigns concluded and the emperors were on their way home, and because Geta stayed in York and never went on campaign, the English Channel seems a likely explanation. If that’s correct, then the River God coins of 207 and 211 AD look like they neatly bookmark the start and end of the trip to Britain.

As no more than an idle musing, it’s interesting to note that two emperors crossed the channel to enter Britain, and only one crossed it to leave Britain, perfectly matching the number of gods on the respective coins. Ok, technically two crossed it on the way back, but Geta and Caracalla hated each other and each would have considered themselves the only true emperor. It might have been the case that the river gods were being called on to protect the emperors’ travel across water to and from Britain.

211 AD: Another River God for Geta

The final two coins (RIC 4 Geta 171A and RIC 4 Geta 171B) are sestertii from Geta showing a woman seated, with a river god below the seat, and an unknown figure sitting on the ground. I’ve never seen these attributed to the Scottish campaigns but I’m including them because of the date, the river god, and the unknown figure which also appeared on the 207 AD coins. 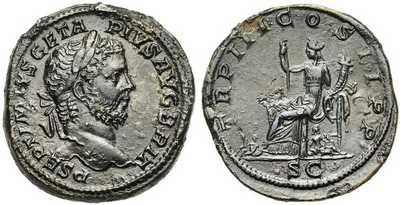