Between 79 AD and 84 AD the governor of Britain, Gnaeus Julius Agricola, successfully attacked the tribes of Northern Britain, advancing far into the north east of Scotland and winning a major battle at Mons Graupius. The emperors at the time were Vespasian (until 79 AD), Titus (until 81 AD) and Domitian. Domitian, jealous that Agricola’s victories were overshadowing his own in Germany, recalled him to Rome in 85 AD and all of his gains in Scotland were lost.

Despite their success, these victories do not feature prominently on their coins. In fact, none of Vespasian’s, Titus’s or Domitian’s coins explicitly mention Britain. While this is possibly understandable for Domitian, it’s surprising for Vespasian and Titus. Both emperors had served in the military in Britain, and both had previously minted a large number of coins explicitly celebrating their victories over Judaea.

This has lead to some debate as to whether any of their coins relate to Britain at all. Vespasian and Titus minted a large number of coins to celebrate their victories in Judaea between 70 and 73 AD, leading some to assign all the coins discussed below to these campaigns. However, these “Judaea Capta” coins have a very defined iconography (the word Judea and/or a palm tree) and the coins below don’t. David Sears (in “Roman Coins and Their Values 1”) identified five types of coins that might be related to the British conquest. I’ll discuss the various candidate coins below, starting with those most commonly attributed to the British campaigns.

Note: coins from these emperors appear in RIC 2 which was revised and released as a second edition. The reference numbers in the first and second editions are different, and you will see both sets used. I’m using the latest numbers.

Titus was declared imperator for the fifteenth time in late 79AD because of Agricola’s victory at the river Tay, so he minted two aurei and four denarii in 80 AD celebrating this.

Hendin described these (and the following) coins as “Judaea Capta” coins that celebrated the victories over Judaea between 70 and 73AD. This is unlikely to be correct. Apart from the fact that:

Titus minted a number of coins from 79 AD to 81 AD that explicitly said Judaea on them. It doesn’t make sense for him to then mint coins referring to the same event but without mentioning Judaea or using the traditional iconography. Vespasian and Titus were very explicit on their coins about their subjugation of the Jews, and these ones are just too subtle to be related to that.

Jane M. Cody discusses this in more detail in “Conquerors and Conquered on Flavian Coins” (p111). David Sears (in “Roman Coins and Their Values 1”) also suggested that they could be related to Britain (Sears 2511).

Titus minted ten types of coin in 79 AD (three aurei and seven denarii) with a male captive kneeling before a trophy. These might be celebrating Agricola’s victory at the river Tay which occurred in this year, or just celebrating his general success (he had been beating British tribes since 77AD).

These are commonly described as Judea Capta coins, although there isn’t universal agreement on this (See Jane M. Cody’s “Conquerors and Conquered on Flavian Coins“). David Sears (in “Roman Coins and Their Values 1”) also suggested that they could be related to Britain (Sears 2449, 2493 & 2505). This page puts forward arguments for Judea Capta along with Cody’s arguments for being related to Britain.

The arguments for being associated with Agricola’s victories in Britain are:

As with the previous coins, with two sitting captives, Titus minted a number of coins from 79 AD to 81 AD that explicitly said Judaea on them. It doesn’t make sense for him to then mint coins referring to the same event but without mentioning Judaea or using the traditional iconography. Vespasian and Titus were very explicit on their coins about their subjugation of the Jews, and these ones are just too subtle to be related to that.

Unlike the previous coins, the shields on these coins are not explicitly Celtic, and in fact, similar shields were used on Judea Capta coins (see for example Vespasian’s RIC 2 (2) 1179). However, similar non Celtic shields were also used by Claudius on his explicit “De Britann” coins (see for example RIC 1 (2) 44). Cody attributes this to the common Roman misidentification of Britons and Celts. Tacticus (“The Life of Cnæus Julius Agricola” Chapter 11) makes a distinction between the tribes in the north and south of the country, and it’s possible that the engravers just didn’t know the difference yet.

Victory Setting Round Shield on Trophy

The final coins which David Sears think might be related to Britain (Sears 2309) were minted by Vespasian in 79 AD, just before he died. They have Victory on the reverse, setting a round shield on a trophy with a sitting captive below. Again, these coins don’t have any of the standard Judea Capta iconography, and the reverse design was never previously used with Judea Capta iconography. 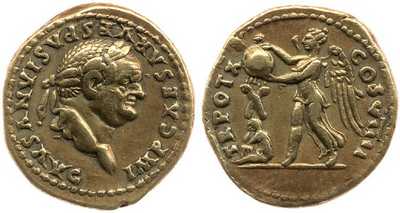