“But as he advanced through the country he experienced countless hardships in cutting down the forests, levelling the heights, filling up the swamps, and bridging the rivers” Cassius Dio, Roman History LXXVII Chapter 13

Septimius Severus minted a small number of coins in 208 AD showing soldiers crossing a permanent bridge over a river. Caracalla minted a (now unique) medallion in 209 AD showing soldiers crossing a bridge made out of boats. It is commonly thought, although not fully accepted, that these refer to bridges built over the Rivers Forth and Tay in Scotland, which were major obstacles on Severus’ chosen route north. There are a number of competing theories about these coins, ranging from which coin refers to which river, where on the rivers the bridges would have been built, if they actually refer to bridges in Scotland, or if they even refer to bridges in Britain.

“The whereabouts of these bridges has been the subject of much inconclusive theorizing”, From Dot to Domesday

The most common bridge coin from Septimius Severus is the As, coming in three varieties (RIC 4 786A, RIC 4 786B, and RIC 4 786C) which only differ on the obverse. They show an arched bridge with a boat passing below on waves. The bridge is roofed, with five figures crossing. Each end has a tower with three arches, and statues on top. Some coins seem to show horses on the left tower and people on the right, while others coins show a facing four-horse chariot on each side, with a person to each side of the horses, although it’s likely they were trying to show the same thing. There appear to be three riders in each chariot, which some have interpreted to be the three emperors (although if you take the coin literally, that would be six emperors in total!). The design is mainly copied from some of Trajan’s coins (RIC 2 569 (As), RIC 2 569 (Sestertius), and RIC 2 570 (Dupondius)), although some embellishments have been made.

The Aureus (RIC 4 225) is unique, and no photos of it seem to exist online (but if you imagine a gold version of the coin above, you’ll be 99% of the way there).

The Medallion is possibly unique. There is one in the Paris collection, but Curtis Clay believes it to be fake. CNG sold possibly the only real version for a surprisingly small amount (considering what it is) in 2007. You can read more about that particular medallion by following the previous link.

Caracalla’s medallion (RIC 4 441), known as the “TRAIECTVS medallion”, is unique and in the Paris collection. It shows a bridge made out of three boats with some figures crossing. These have been described as 1) a pair of emperors walking side by side, one of whom appears to be holding a baton; 2) four standard bearers, carrying not legionary eagles but cohort standards of the usual form; 3) marching soldiers including apparently one horseman; 4) a soldier ascending the right hand incline. Perhaps this is clear on the original in Paris, but the copy in the British museum shows blobs, and not enough of them to account for all these figures. 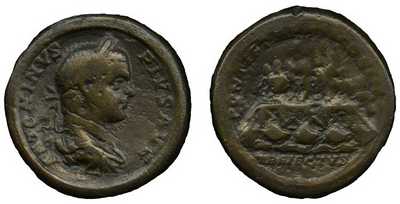