Constantius Chlorus spent the last year of his life campaigning against the Picts in Scotland with his son Constantine (the great). Just before he died in Eboracum (modern day York) in 306 AD, he declared Constantine augustus, and his loyal troops supported that claim. As one of the senior emperors, he was entitled to do this. Galerius, the other augustus had had other plans, and this eventually led to a civil war which Constantine won, becoming sole emperor and dismantling Diocletian’s tetrarchy. In total, he ruled for 31 years.

In all that time, he only minted two types of coins that relate to Britain. One of them is dubious and the other uncertain.

A Medallion From the Arras Hoard

The dubious coin is actually a medallion from the Arras hoard. RIC 6 Treveri 801 (40.25g equating to 10 Solidi), shows the emperor in military uniform, holding a spear and a globe.

The authors of the Spink advert selling copies said this “probably commemorates the accession of Constantine the Great at York in A. D 305-306”. While the authenticity of this piece is not in doubt, the claim that it relates to the accession of Constantine at York is unsubstantiated, and may be nothing more than over enthusiastic marketing. RIC 6 dates this medallion to 309-310 AD.

The other type of coin that is of interest is the Adventus type that Constantine struck in 307 AD, 310 to 312 AD, and 314 AD. The problem, as usual, is that there isn’t unanimous agreement whether the first two sets of coins represent visits to Britain.

Constantine is thought to have visited Britain in the first half of 307 AD to try and avoid the civil war that had started in Italy. He is known to have returned to Trier in the second half of 307 AD, where he got married and then launched an attack on Franks, driving them back across the Rhine. Either visit could warrant Adventus coins. 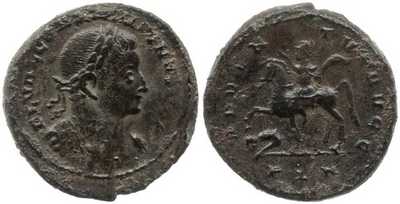 RIC 6 only lists one type of Adventus coin from 307 AD, RIC 6 Londinium 82, and it’s pretty rare. Ian Stewart in his 1998 paper “The London Adventus of 307” mentions that four examples had turned up since RIC 6 was written, and I’ve found one other on PAS.

The arguments for these referring to a British adventus are below.

Constantine fought Maxentius in late 312 AD and entered Rome victorious on the 29th of October, apparently staging an adventus celebration in the city. However, he is also thought to have visited Britain sometime between July 310 and the summer of 312 to gather troops for his upcoming war with Maxentius. Again either event could have resulted in Adventus coins being minted.

There’s also an unlisted coin on this page (search for “It should come after RIC 6 London 141”).

The arguments for these referring to a British adventus are next.

The best arguments for resolving whether or not these adventus coins relate to Britain were put forward by John Casey in his 1978 paper “Constantine the Great in Britain – the Evidence of the Coinage of the London Mint, AD 312-314“. His first point relates only to the 310-312 AD coins, and is that the mint in London, which was the most distant from Rome, would have been unable to mint these coins in 312 AD for a victory that only happened on the 29th of October that year.

His other arguments are applicable to the 307 AD coins as well. Firstly, for eight of the ten other adventus examples between 296 and 335 AD, it is known that the emperor was at (or near) the mint city. The whereabouts of the emperor for the remaining two (one of which is the 307 AD adventus) are unknown, but there is no positive evidence of a mint celebrating a remote adventus. Secondly, the 307 AD and 310-312 AD adventus coins were only minted by the London mint. None of the other thirteen imperial mints decided to mint any coins to celebrate. It is particularly strange that the Trier mint decided not to mint coins for a Trier adventus in 307 AD, and that the Rome mint decided not to mint any coins for the Rome adventus in 312 AD.

It’s fair to say that both sets of coins refer to a visit to London.

Constantine took on the title Britannicus Maximus in 315 AD, suggesting recent victories in Britain. It is thought that he came in 314 AD to campaign against the Picts. He had withdrawn troops in 312 AD to fight in Rome against Maxentius, and this may have left Hadrian’s wall weakly defended. His location in 314 AD is well known except from April to October, so if there was a visit and a campaign, it would have been then. Again, only the London mint minted adventus coins for this. 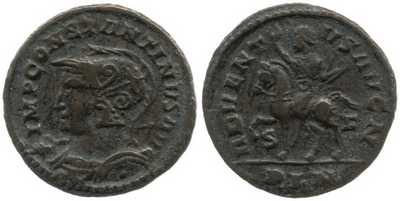 One interesting feature is that unlike the earlier coins, none of these feature a captive on them.