The Roman conquest of Britain started in 55 BC when Julius Caesar popped across the channel, made a lot of noise, and left again, but the first mention of Britain on a coin wasn’t until 46 AD when Claudius put a triumphal arch and “De Britann” on some coins to show he had conquered the island and added it to the Roman empire.

Claudius accidentally became emperor in 41 AD (funny story – he was hiding behind a curtain while the Praetorian guard were assassinating the emperor Caligula and his family, when another Praetorian guard found him and declared him emperor. It was possibly a set-up) and needed something to cement his power. One of his early acts was to invade Britain in 43 AD. By 46 AD this had progressed far enough for him to celebrate his victory, and two triumphal arches were erected for him; one in Rome and one in Gaul. These arches were commemorated on Aurei and Denarii. 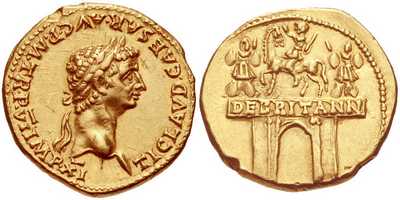 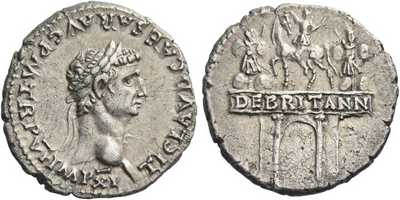 Intriguingly, this coin might not be related to his victories in Britain at all, but instead might be a celebration of the upcoming war in Britain. There are clues to this in the obverse legend “TI CLAVDIVS CAESAR AVG GERM P M TR P”

It’s possible that the Caesarea mint were just using a legend that was three or four years out of date, but if not, then this coin dates to 41-42AD.