The Spirit of Britain Coin

There’s a unique antoninianus in the Ashmolean Museum, with the legend “GENIO BRITANNI” which basically means the spirit of Britain. It’s listed in RIC 5(B) as RIC 5 240. 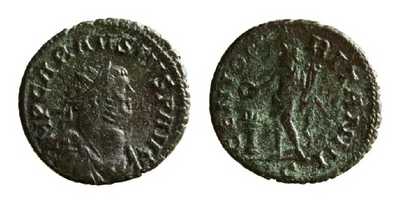 The Restorer of Britain Coin

Do a search on Google (or a search engine of your choice) for “Restitutor Britanniae” and you will get lots of hits about a coin from Carausius bearing this legend, normally mentioned alongside the Genius Britanniae coin (note the incorrect legend). For example:

“In his coinage, he depicts himself as the restitutor Britanniae (‘Restorer of Britain’) welcomed by the genius Britanniae…” Ref and Ref

“Something of a would-be populist, he had coins minted with bold slogans that declared him restitutor Britanniae (‘restorer of Britain’); genius Britanniae…” Ref

“..coins that come tumbling out of wooden boxes in the Museum’s stores blare out ‘EXPECTATE VENI’ (Come the Awaited One), ‘RESTITUTOR BRITANNIAE’ (Saviour of Britain). Ref

“… while issuing his own coinage (with inscriptions such as Restitutor Britanniae, Restorer of Britain, and Genius Britanniae…” ref

However, not a single site that mentions this provides a reference to an actual coin. A search in OCRE for any coin of Carausius featuring “res*” doesn’t return any coins with this legend. A search on the same site for “brit*” returns 860 results, but none with this legend (and yes, I did check them all). I checked on PAS, acsearch, and the British Museum’s collection as well, and got no results. The legend index in RIC 5(B) doesn’t list anything even similar to this, and neither does the Carausius page in ERIC.

I’m not convinced this coin is anything more than a myth, but please contact me if you know any more about it.