Carausius minted a large number of Adventus coins, possibly to celebrate his arrival in London which he made his capital shortly after usurping power. I say possibly because the coins can’t all be attributed to the start of his reign, and in fact were minted for a number of years. When considered alongside the Britannia coins and their “EXPECTATE VENI” (Come, O Expected One) legend, it might be possible that Carausius saw himself as a bit of a saviour, and the Adventus coins were an ongoing celebration of him arriving at all.

The mix of legends is interesting:

Most of the coins (seventeen of the twenty three types in RIC 5(B)) have the legend ADVENTVS AVG (the arrival of the emperor) as expected. A further two have ADVENTVS CARAVSI (the arrival of the Carausius) which is novel but understandable, and another two just have ADVENTVS, which again is understandable. However, the two types with ADVENTVS AVGG (the arrival of the two emperors) need some explaining because there’s no obvious candidate for a second emperor. Carausius did mint coins featuring “AVGGG” after 289 AD as he was trying to ingratiate himself with the real emperors Diocletian and Maximianus, but we’re an emperor short with just AVGG.

W. Owen proposed (in his wonderfully titled 1756 book) that the second emperor was Allectus, who was the emperor after Carausius, although it’s not thought that they were ever co-emperors. Dr. Stukeley considered the second emperor to be Carausius’ son Sylvius, although the author of the next paper points out that there is no historical evidence that Sylvius even existed.

Perhaps a better explanation is given in “The Reign And Coinage Of Carausius, A.D. 287-293” (Percy H. Webb) where he points out that mistakes in the legends were common. For example, AVG rendered as IVG and VIRTIS AVG rendered as VITAVI (“I have escaped”) amongst others. It’s probable that the AVGG on these coins was meant to be either AVG or AVGGG, depending on when they were minted. He notes that the examples ending in AVGG are nearly all of “rough and barbarous execution”, and proposes that they are the work of illiterate moneyers.

Note however, that only one coin type shows two captives on the reverse (normally just one), and that’s a coin with an AVGG legend. Read into that what you will!

As for the coins themselves, RIC 5(B) lists twenty three different types with thirteen different reverse designs, although the descriptions of many of these reverses are so similar that it’s probable that they are either minor die variations, or just different interpretations by different authors of the same reverse image. I’ve been unable to find photos of most of them to tell if they really are different. I have simplified the thirteen reverses into just the five types that show significant differences (for example, I’ve interpreted “holding a sceptre”, “sometimes holding a sceptre”, and “holding a spear or sceptre” as the same image).

RIC 5(B) lists several variations for this type. The basic image is Carausius riding left and holding a sceptre in his left hand. Some coin descriptions say he is also raising his right arm, and others don’t mention that. He’s raising it in all the photos I can find, so I suspect this is just a feature that wasn’t considered important by some of the cataloguers. Another variable mentioned seems to be the sceptre, which is sometimes described as a spear. Again, it’s not clear from the photos I’ve found if there really is a difference here.

One genuine difference between the reverses is the presence of a captive: 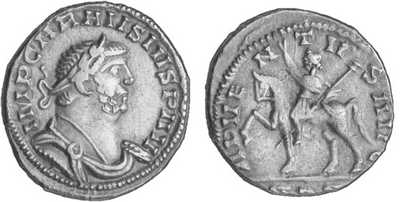 The coins also differ greatly in the letters in the exergue, which may or may not have been mintmarks (click on the links below to see them, and the legends).

Two antoniniani not listed in RIC:

RIC 5(B) lists one coin that features two captives on the coin:

It’s also one of the coins with AVGG on the reverse legend. Unfortunately, I’ve been unable to find a photograph of this coin.

RIC 5(B) lists one coin type that has the emperor holding a globe in each hand, or a globe in the right hand and a sceptre in the left hand:

It’s also one of the coins with ADVENTVS CARAVSI on the reverse legend. Unfortunately, I’ve been unable to find a photograph of this coin.

Carausius Riding Right Holding Spear Horizontally Over Head, and With One Captive

RIC 5(B) lists two coin types that have the emperor riding to the right (instead of the left), and holding a spear horizontally over his head, and with a captive under the horse:

I haven’t found photos of either type.

Carausius Riding Right With One Captive

Another variation which isn’t in RIC 5(B) has the emperor’s horse galloping to the right with a prostate captive below the horse. The emperor isn’t holding a spear horizontally above his head 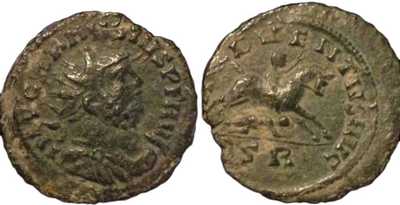 Carausius Riding Right With no Captives

The Portable Antiquities Scheme has a variation that’s not in RIC 5(B), where the emperor isn’t holding a spear horizontally above his head, and there is no captive 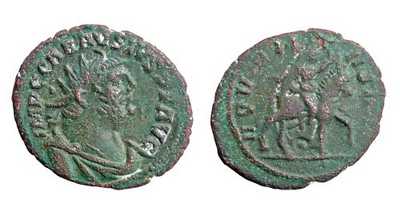 The final Adventus type has Felicitas on the reverse instead of the emperor. She’s holding a caduceus in her right hand and cornucopiae in left hand.