Carausius’s reign came to an end in 293 AD when he was assassinated by Allectus who was thought to be his treasurer. Allectus remained in charge until 296 AD when he in turn was killed by Constantius Chlorus.

although the unique legionary coin is thought to be fake.

There are three types of Adventus coins known for Allectus, although it’s not clear where he was arriving from as he was a member of Carausius’s government, so already in Britain. It’s probable the he was just carrying on with Carausius’s habit of minting them for no specific arrival event.

One of the coins, RIC 5 1, is a unique aureus that was in Count D’Erceville’s collection in 1884. I haven’t been able to find out where it is now.

RIC 5 1 Aureus. Picture from “Coins of the Romans Relating to Britain” by John Yonge Akerman. 1844

Andrew Burnett has a photo of it in his 1984 paper “The Coinage Of Allectus: Chronology And Interpretation”. Page 20, plate 2, #4.

Two antoniniani types are also known. The first is listed in RIC 5(B) as RIC 5 62 and shows Allectus riding left, raising his right hands, holding a sceptre, and about to stand on a captive. 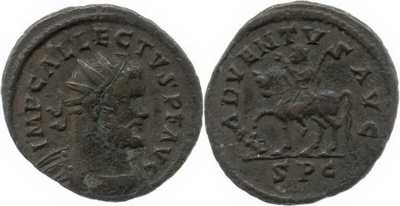 A unique coin commemorating the Legio II Augusta (based in Caerleon) was found at South Shields in 1880.

Picture from “On the Recent Discoveries in the Roman Camp on the Lawe, South Shields” John Collingwood Bruce in Archaeologia Aeliana Series 2. 1885

It’s listed in RIC 5(B) as RIC 5 24, but it features the wrong badge (a lion instead of a capricorn), the wrong name (Leg II instead of Leg II Avg), has an unorthodox portrait from an obverse die used elsewhere with an irregular reverse, and the lettering isn’t cut uniformly. As such, it’s considered to be a contemporary forgery.